Director Trevor Reed will discuss the preliminary results of his work on the Hopi Music Repatriation Project, as well as some ideas for the growth of the Project, on KUYI this morning at 8:30 am MST.  Please tune in to 88.1 FM or visit kuyi.net to join the conversation!

In addition to our ongoing commitment to returning Hopi music currently housed in archives and museums across the world, we are also exploring ways these and other musical materials might benefit the Hopi community.  Trevor will talk this morning about initial ideas for a Hopi Music Symposium in 2017 to bring together local composers to talk about and share Hopi music.  He will also present some of his ideas for community-partnered research to document local creative practices to support future generations of Hopi composers and performers.  If you are interested in participating in the Hopi Music Symposium Planning Committee or sharing your ideas about composing, please leave a comment below.

Many thanks to the Hopi Cultural Preservation Office and the Office of the Chairman for featuring the Hopi Music Repatriation Project’s collaborative work with the A:shiwi (Zuni) people in the September 2013 issue of the Hopi Tumalhoymuy Tutuveniam. Kwakwahy!

Thank you to Gary Shapiro and the Columbia Record for the recent article on the Center for Ethnomusicology‘s current repatriation efforts, including the Hopi Music Repatriation Project. 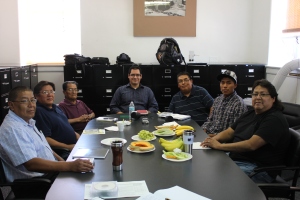 ZCRAT members collaboratively identified the performers, content, and contextual details pertaining to approximately 25 A:shiwi recordings currently housed in Columbia’s Center for Ethnomusicology in preparation for their formal return next year.  The body of recordings currently being repatriated also includes two Hopi ceremonial songs containing Zuni linguistic content, which were previously repatriated to Hopi clans and villages but have now been offered to the A:shiwi elders at the request of Hopi leaders and representatives as a token of the ongoing alliance between the two communities. Of particular note were ZCRAT members’ recollections of individuals, places, and histories that resurfaced through listening to these recordings. Members of ZCRAT stated that several of the songs would be heard again at upcoming events and within local community programs and also expressed interest in meeting with Hopi composers to exchange information about A:shiwi language and poetics, as has been practiced over centuries between the two groups.

HMRP and HCPO thank ZCRAT members for their willingness to collaborate with us in the music repatriation project and look forward to working with them in the coming years as we begin process of returning these songs and their corresponding rights back to the A:shiwi people.

We hope you enjoy this podcast with Hopi Cultural Preservation Office (HCPO) repatriation coordinator, Lee Wayne Lomayestewa. Along with his duties at HCPO, Lomayestewa is an active traditional leader at Shungopavi village, rancher, and father. Lomayestewa offers insights into the role of Hopi song in Hopi society, a Hopi perspective on the Federal repatriation process, and discusses what is at stake in the return of recorded Hopi voices from the past to contemporary Hopi life.

Posted on October 29, 2010 by trevor99
The Hopi Music Repatriation Project will be featured on Native America Calling (check local affiliates here) with Columbia University Music Department Chair, Aaron Fox, and HMRP lead researcher, Trevor Reed.  The program invites community listeners to join with experts in a discussion of critical issues for indigenous people.  The program will air on Friday, October 29, 2010 at 10 am Pacific / 1 pm Eastern Time and will be rebroadcast at 4 pm PT/ 7pm ET
Native America calling is heard on 52 stations throughout the United States and Canada, with approximately 500,000 listeners.
Link to the like webcast at www.nv1.org.
Posted in Uncategorized | 1 Comment

What is Community-Partnered Repatration? Podcast with Aaron Fox, Columbia University

We wanted to share this podcast with ethnomusicologist and Columbia University Music Department Chair, Aaron Fox, in a timely way as we have very good news to report.  Fox along with Columbia University Earth Institute Post-Doctoral Fellow, Chie Sakakibara, have reached an important milestone in their effort to repatriate music from Columbia University’s Center for Ethnomusicology to the Iñupiaq community.  On June 16, Fox and the Iñupiat History, Language, and Culture Commission reached a preliminary agreement to return the rights to Laura Boulton’s 1946 series of Iñupiaq recordings to their community of origin. The details of this important announcement can be found here.

Congratulations to all involved!  We hope you enjoy this interview with Aaron Fox and invite your comments.

Trevor Reed, HMRP lead researcher, will present the results of preliminary work to return the Laura Boulton collection to villages and societies within the Hopi Tribe on Friday, May 21, 2010 in Tucson.  The invitation was extended by the Native American and Indigenous Studies Association, and Mr. Reed will be joined by representatives from the Cook Inlet Tribal Council, Peabody Essex Museum, University of Arizona, and the Newberry Library McNickle Center.  Chairing the panel will be Kevin Grover from the National Museum of the American Indian.

Unabridged text of the paper to be presented is available here: NAISA Hopi Voices.

We thank NAISA and the selection committee for their interest in this project.

The support of CRATT members and Leigh Kuwanwisiwma, HCPO director, during the meeting provided significant momentum for HMRP as the project moves forward with additional research this summer. The goal of this first meeting with CRATT was primarily to outline the project, present a few of the recordings as examples of the more than 6 hours of Hopi music archived in Columbia’s Center for Ethnomusicology, and to find out how the collection might be of use to Hopi villages and clans. The opinion given by these traditional leaders was overwhelmingly in favor of returning the recordings and the copyrights to the Hopi people. Just how the recordings might be used and the specifics of who should hold the rights were the subject of significant dialog, and additional conversations on these topics will be the the theme for additional meetings with HCPO and CRATT over the course of this year. As Kuwanwisiwma explained, “There is a delegated authority vested in CPO and our CRAT team here, but how to work it out–how to protect the music–that’s all of our job here to do.”

Several of the songs presented were familiar to CRATT members, and some have perpetuated almost identically through the collective memory of kiva societies and villages.  CRATT members were able to recognize and identify many of the voices and songs on the recordings.  Perhaps the highlight of the event was the presentation of one of the recorded kööyemsi (mud head katsina) songs recorded by Laura Boulton in Hoatvela (Hotevilla) around late July of 1940.  Nearly every member of CRATT joined in to sing, showcasing how many of the songs captured by Boulton continue to be a vibrant part of Hopi life nearly 70 years later.

HMRP thanks HCPO and CRATT for their invitation to present these songs and for their support of this important project.